Nearly 95% of hydrogen is produced through the hydrocarbon route due to its lower production costs. The process is called the thermochemical, which use heat and chemical reactions to release hydrogen from organic materials such as fossil fuels and biomass. One of the demerits of this process is carbon emission, especially when there is no carbon capture in place.

One of the environmentally friendly alternatives to produce hydrogen is to use water as feedstock. Currently, the most developed commercially available technology for producing hydrogen from water is called electrolysis. Water electrolysis is the decomposition of water (H2O) into its basic components, hydrogen (H2) and oxygen (O2), through passing electric current. Through this process, electrical energy can be stored as chemical energy of the resulting hydrogen. Water is an ideal source for producing hydrogen because it only releases oxygen as a by-product during processing. The hydrogen produced through the decomposition of water when using a renewable energy source is called green hydrogen.

Electrolysis transforms electrical energy into chemical energy by storing electrons in the form of stable chemical bonds. The new formed chemical energy can be utilised as a fuel or converted back to electricity when required.

Electrolyser (electrolysis cell) consists of two electrodes called cathode and anode. A cathode is a negatively charged electrode, while the anode is positively charged. Both cathodes are separated by a membrane called electrolyte and surrounded by water. There are different types of electrolysers, and they function in slightly different ways because of the use of the other type of electrolyte material.

There are two types of separators, one is used in the electrolyser, and the other is for a fuel cell. The Water Electrolysis Separator is needed when producing hydrogen, which has to stand against high temperature and humidity environments. The Fuel Cell Separator is used in fuel cell and is needed for utilising hydrogen. 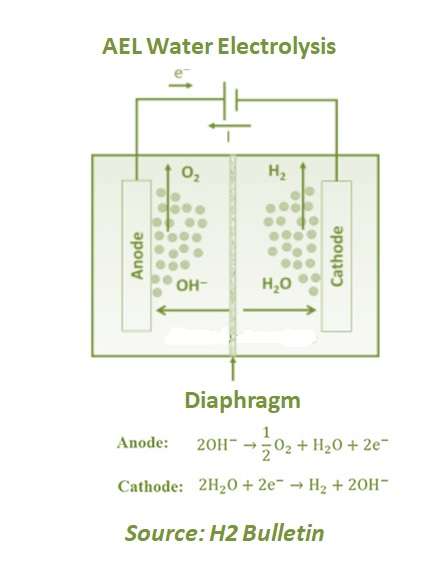 The anode and cathode are separated by a diaphragm separating hydrogen and oxygen gases and preventing them from mixing up again. At the cathode, water is split to form H2 and releases hydroxide anions which pass through the diaphragm and recombine at the anode to form O2. Commercial alkaline electrolysers operate at 100°–150°C 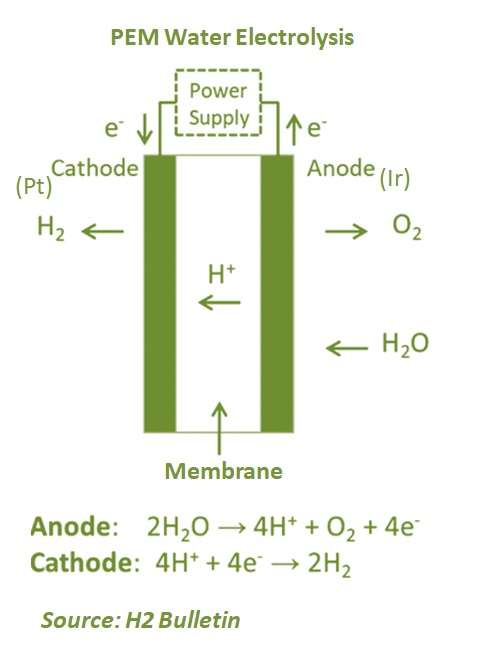 Proton exchange membrane electrolysis (PEM) is the relatively latest technology and has been commercially used for several years. It has several advantages over AEL, such as product gas purity in partial load operation. In a PEM electrolyser, the electrolyte is used in the form of a solid speciality plastic material. At the anode side, the process decomposes water to produce oxygen and positively charged hydrogen ions (protons). Furthermore, the electrons flow through an external circuit while hydrogen ions pass through the PEM to the cathode. At the cathode, hydrogen ions bond with electrons flowing from the external circuit and together, they form hydrogen gas. Proton exchange technology removes the need for robust and caustic bases necessary to drive the electrolysis process. PEM electrolysers operate at 70°–90°C. 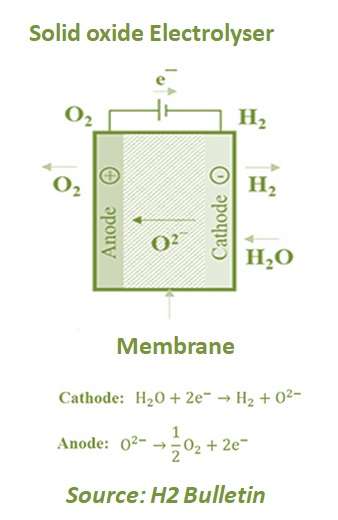 Alkaline and PEM electrolysers are known as Low-Temperature Electrolysers (LTE). However, on the other side, Solid oxide Electrolyser (SOE) is known as High-Temperature Electrolyser (HTE) and uses a solid ceramic material as the electrolyte. It combines water at the cathode with electrons from the external circuit to produce hydrogen and negatively charged oxygen ions. It then transports oxygen ions through the solid ceramic membrane for a reaction at the anode to produce oxygen gas and generate electrons for the external circuit.

This technology is currently under development and has been used in a few pilot plants. HTC performs the electrolysis of water vapour at high temperatures, which lead to higher efficiencies (80-90%) compared to previous options. Furthermore, it can also use waste heat and compensate for the electricity needed. As the temperature rises, the proportion of the energy required for water splitting is introduced as heat, while the demand for electricity or the required voltage decreases. The electrolyte is a suction yttrium oxide stabilised zirconia (YSZ) type solid ion-conducting material. As ionic conductivity only starts over 700 ° C, so for this type of electrolysis, the suggested temperature for proper operating is between 700 to 800 ° C.

Anion Exchange Membrane (AEM) has a similar structure to a PEM cell, with the main difference is that the membrane transports anions (OH–) instead of protons (H+). Therefore, AEM technology uses the same process in the electrodes as in the traditional alkaline cells. One of the key advantages is that the membrane is less expensive compared to the PEM electrolyser. The electrolysers also do not use platinum-group-metal (PGM) catalysts such as PEM cells. Compared to traditional alkaline electrolysers, AEM also results in high purity hydrogen at high pressure.

Are you looking for information related to hydrogen? H2 Bulletin can help with your hydrogen research. Please feel free to contact us at info@h2bulletin.com or Telephone: +44 (0) 208 123 7812.

We are independent and highly approachable experts available to support you.

Back to top button
Close
Close
Close
We use cookies to ensure that we give you the best experience on our website. If you continue to use this site we will assume that you are happy with it.OkPrivacy policy