Before start going into the basics of hydrogen, let’s remind ourselves of the difference between element, atom, molecule and compound. Element is a substance that we cannot break down further to any other substance. And that smallest amount of element is called an atom. But then what is an atom? An atom is a basic unit of an element that defines its structure. An atom consists of a nucleus and orbit/s. Protons and neutrons live in the nucleolus, and electrons move in orbits.

On the other hand, a molecule is made up of two or more atoms and chemically bonded such as H2, O2, H2O, C17H20N4NaO9P etc. A compound is a substance composed of two or more different types of chemically combined elements in a fixed proportion. Remember that all molecules are not compounds, but all compounds are molecules. H2O is both a molecule and a compound.

The atom in atomic hydrogen has one proton in its nucleus with a positive electrical charge and one electron in a single orbit with a negative electrical charge. Hydrogen rarely exists in its simplest form as its unpaired electron try to get together with another electron. Hydrogen in its molecular form is more common. Molecular hydrogen (H2) is a form of hydrogen gas, and it comes into existence when two hydrogen atoms combine. Therefore, at its molecular form, hydrogen consists of two protons and two electrons and makes up the smallest molecule. It is 50,000 times smaller than the thickness of a hair. Being the smallest, it can enter anywhere. Hydrogen cannot be store in plastic made materials as it is too easy for it to pass through the plastic walls. Therefore, it requires special metal containers for storage.

Key milestones in the history of hydrogen

1783: French chemist Antoine Lavoisier named the gas hydrogène which is derived from the Greek word “hydro” and “genes,” meaning “water” and “born of.”

1838: German-Swiss chemist Christian Friedrich Schönbein invented the fuel cell, which led to power generation out of hydrogen and oxygen.

1898: Scottish scientist Sir James Dewar turned hydrogen to a liquid form by cooling it down to -252.87°C.

Is hydrogen the most abundant element in the world? 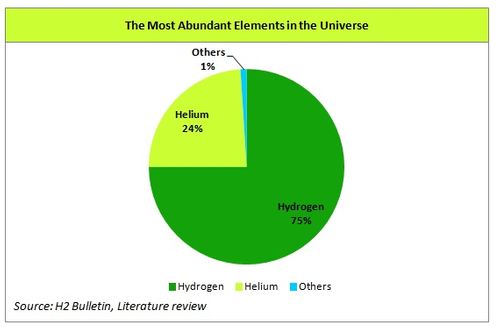 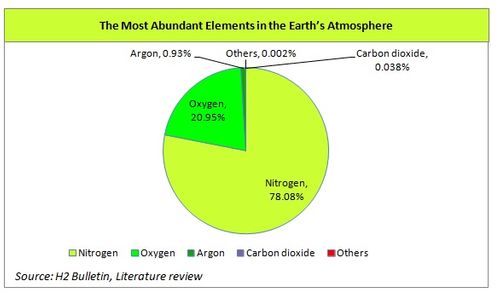 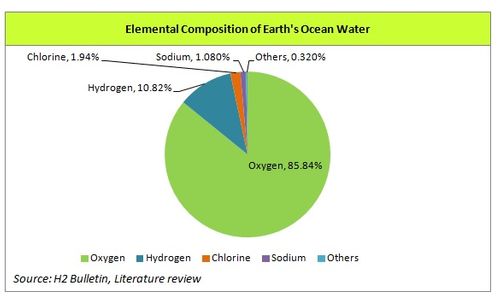 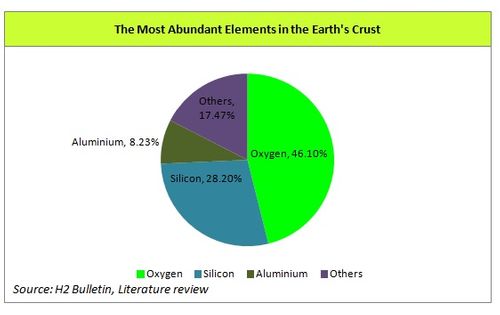 Indeed hydrogen exists in abundance as a compound such as water, part of living bodies, carbon compounds, and atmosphere. However, it is not the most abundant element in the world. The chemical composition of our earth is slightly different from that of the universe.

The earth crust’s chemical composition consists of oxygen, the leading element with 46.10% of weight, followed by silicon, aluminium, iron, calcium, sodium, potassium, and magnesium. The crust is only the outer body of the earth which is between 5km to 10km. However, very little is known about the core and mantle, though the amount of hydrogen is considered negligible. The earth atmosphere is almost 99% composed of nitrogen and oxygen, so very little hydrogen can be found in the form of gas or vapour. The only part where we can find abundant hydrogen is water, though it still paired with oxygen as a compound.  Water covers 71% of the earth’s surface, whereas the oceans account for about 96.5% of all earth’s water. In ocean water, hydrogen accounts for around 10.8% of the total mass.

Researchers are working on offshore electrolysis technology to produce hydrogen from seawater by using wind energy. Running the electrolysis process in a marine environment is complicated and faces numerous challenges. If such technology succeeds, it could be a significant breakthrough for the hydrogen industry. The hydrogen produced from water by using renewable energy is called green hydrogen. But the word green does not refer to the gas colour but classification as we now already know that hydrogen is colourless. Learn more about various types of hydrogen and how they are classified.

Are you looking for information related to hydrogen? H2 Bulletin can help with your hydrogen research. Please feel free to contact us at info@h2bulletin.com or Telephone: +44 (0) 208 123 7812.

We are independent and highly approachable experts available to support you.